Network design is critical to the success of businesses. Careful planning is the foundation of an efficient, resilient and well-dimensioned network topology able to support business needs.

Networks need to adapt to application and service requirements that are becoming more and more complex. Networks must be available nearly 100 percent of the time, be flexible to support changing traffic loads and be responsive against unexpected security incidents.

It is important to understand that network design goals are aligned with business strategy. However, the most important factors are usually common to all of them:

Resilience does not necessarily mean redundant links. More parallel links add resilience however convergence time can go up because the Control Plane needs to work harder for every link added. It is necessary to test the network to understand at what point this happens. Talking in general and as a reference good practices recommend around 2 to 3 parallel links in Core networks and maybe few more in Data Center networks as the Control Plane tends to be simpler.

You need to understand the process of convergence after a network failure to comprehend how fast your network is able to recover:

These four steps define the response of your network after a failure.

Security needs to be built in from the beginning in network design.

Nowadays attacks are more sophisticated and firewalls defining an Inside and Outside zones are not enough defenses to protect enterprise networks. Attacks can actually come from the inside of the network.

Therefore a Defense in Depth approach is a much more suitable and effective protection model. The idea behind is to defend a system against any particular attack using several independent methods. It is a layering tactic rather than defeating an attacker with a single, strong defensive line and relies on the tendency of an attack to lose momentum over time. Some examples are patching servers, identifying vulnerabilities, preventing telnet into hosts, etc.

It is also important to define Observation points. They are pre-setup points to monitor what is happening in the network in order to identify abnormal traffic. Consequently we need to clearly define what normal traffic looks like for later comparison.

Observation points or Choke Points are critical as it is possible to see attacks as they go through the network, make decisions, prevent leaking and pre-stage policy and specific actions.

This method is based on the idea of acting faster than attackers can react. OODA Loop is defined by 4 principles: 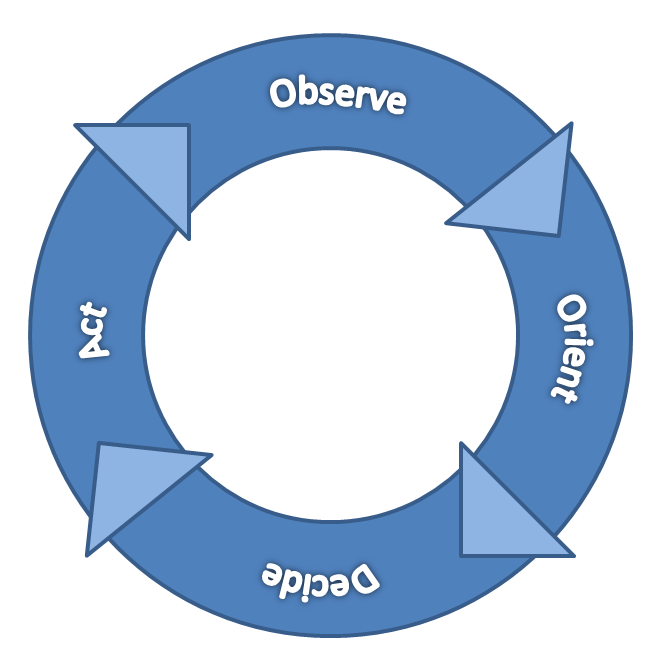 Modularization is the first key concept in network design. A module is a component of a composite structure. Modular network design involves creating modules that can then be put together to meet the requirements of the entire network.

Modules are blocks of different shapes and sizes that contain functionality. Designing one of these blocks is much easier than designing the entire architecture. Each module might be used in multiple places, saving time and effort in the overall design. They can also be removed or replaced independently. Modules also have standard interfaces to each other so that they can talk easily; these are called Choke Points. Modules are independent and any change should be transparent to other modules in the architecture.

Some of the benefits of Modularization are:

Hide Information in the Control Plane can help to improve convergence times, reduce the impact of network changes such as a link flapping and increase stability. These are some of the techniques for hiding information in Choke Points:

Leaky Abstraction is a key concept to be aware of to avoid breaking the whole hidden purpose. Summarization and Aggregation metrics are determined from the more specific prefixes. Therefore, metric changes in the component routes can make the metric of the summary or aggregate prefix to change and also trigger a network update message to advertise it. It is highly recommended to manually configure the metric of a summary or aggregate route.

Modularity, failure domains and resiliency are related to one another. Trying to separate different parts of the network and hide information between them using some of the techniques explained above are considered good practices. The result is each module has its own failure domain and information can be hidden in the Choke Points to avoid further impact on other modules and instability in the network. 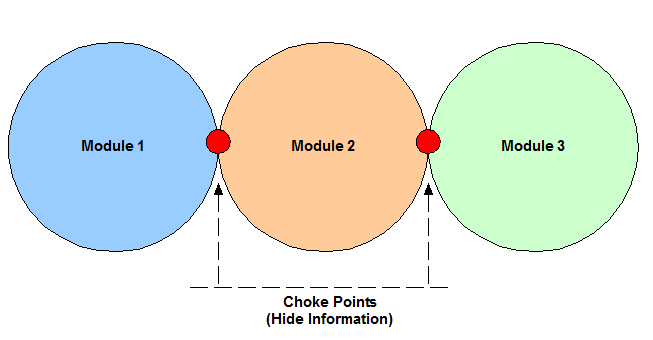 Figure 15 shows the most traditional 3 Layer Campus Network on the left to more modern networks designs in the centre and on the right. 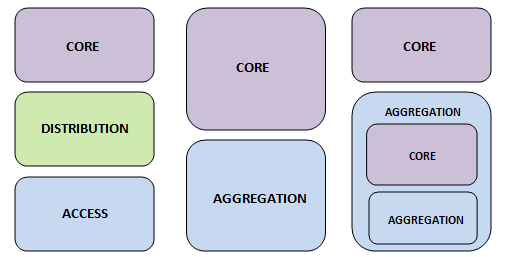 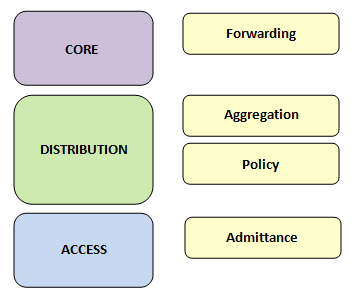 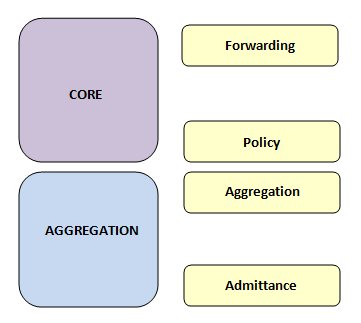 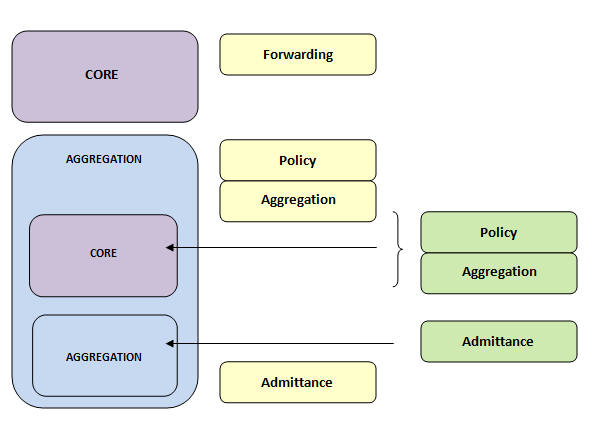 Scale up vs. Scale out

This network decision has also a big impact on performance.

Scale up increase the size of an individual component to manage greater levels of traffic and more processing power. On the other hand, Scale out adds more components in parallel. 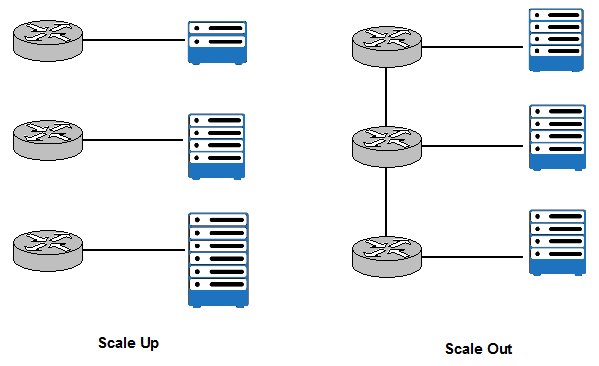 What model is better to chose depends on the type of the workload we are dealing with. Typically Scale out is more efficient and more cost effective. However, the network to connect components needs to be built. In general, Scale out is more matching to network requirements and deployed more often.

These are some key points which define a network topology:

In Hub and Spoke topologies traffic moves along Spokes connected to the Hub at the centre. Spokes‘ traffic never transits other Spokes, traffic always flows through the Hub. Therefore, prefixes are only learnt through the Hub. 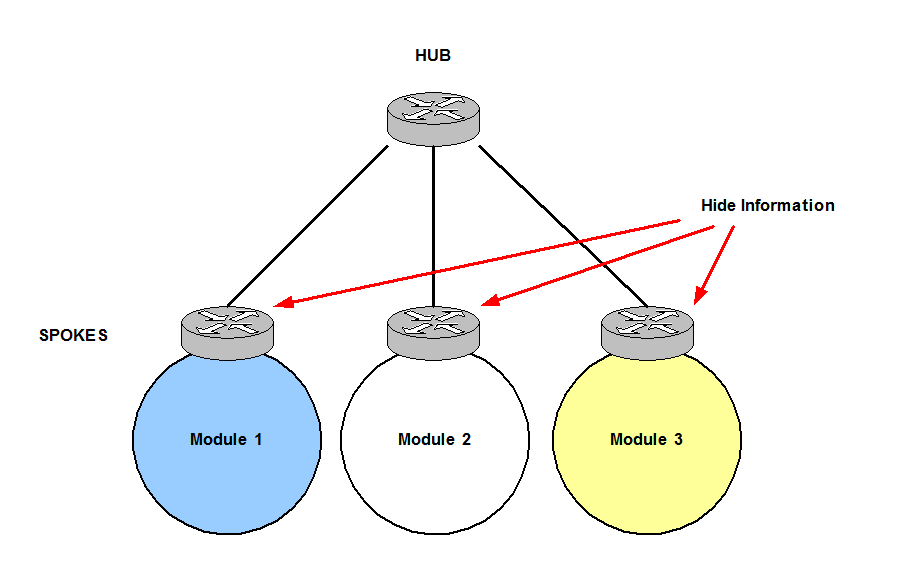 In Ring topologies, every router has two neighbors and an outage does not cause the network to fail: routers take the other path (direction) available. It is also very easy to add new nodes.

However, it is common to run into very heavy utilization of some links and very underutilize links. Figure 21 shows how the majority of the traffic to the servers on the right is coming from the users on the top, this results in heavy utilization of links A and B whereas the other links of the Ring are underutilized. Some solutions are: using overlay tunnels and configure traffic engineering. 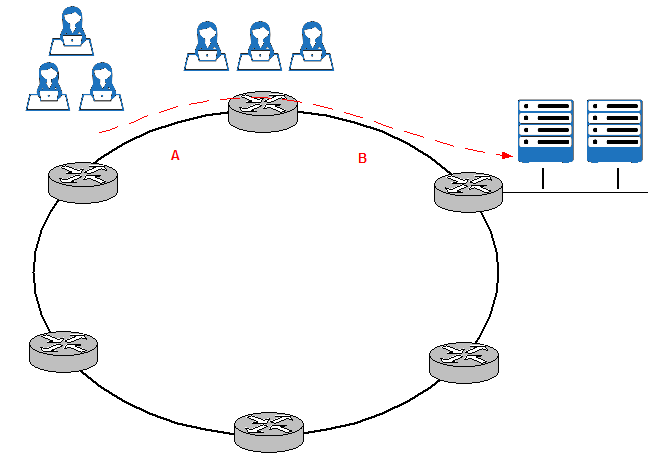 It is possible to break Partial Mesh topologies into Hub and Spoke or Ring topologies to understand better how they converge.

Partial Mesh is not a regular topology and non plainer links (overlapping links) make difficult to understand the convergence process.

Full Mesh topologies are called regular non plainer links. They follow a regular design but they have overlapping links. They are also a mix of Ring and Hub and Spoke topologies.

The main issue is the amount of state of routing information. The number of parallel links increases redundancy but also conversion speed. These drawbacks can be solved with Hub and Spoke topologies. 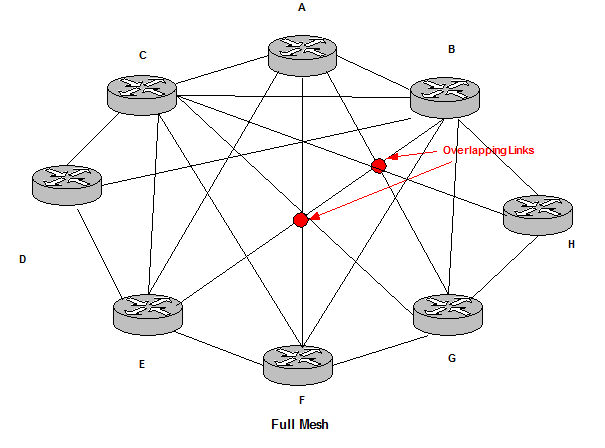 This topology has become very common in Data Center designs.

It consists in Hub and Spoke networks. Hubs are connected to the same Spokes and this pattern is repeated. It is considered very regular.

There are no connections between Leaf routers and Spine routers in order to avoid loops. The network design is a bunch of triangles that makes the Control Plane a lot simpler.