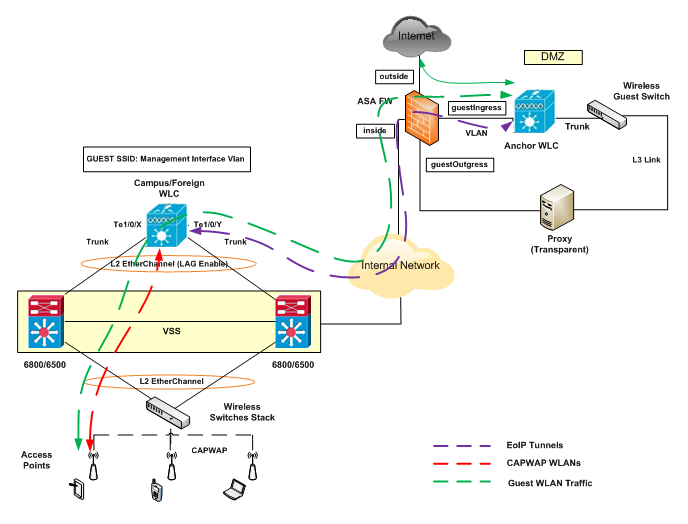 Public WLAN has caused mobile workers to become accustomed to being able to access their corporate network from practically anywhere. This paradigm of public access has extended to the enterprise itself and brings a well-founded apprehension over how to secure internal company information and infrastructure assets.

Ideally, the implementation of a wireless guest network uses as much of an enterprise’s existing wireless and wired infrastructure as possible to avoid the cost and complexity of building a physical overlay network. Assuming this is the case, the following additional elements and functions are needed:

As shown in Figure 1, a controller is located in the enterprise’s DMZ where it performs an anchor function. This anchor controller is responsible for terminating EoIP tunnels that originate from other campus WLAN controllers throughout the network. Remote controllers are responsible for termination, management, and standard operation of the various WLANs provisioned throughout the enterprise, including one or more guest WLANs.

Guest WLANs, instead of being bridged locally to a corresponding VLAN, are bridged via an EoIP tunnel to the anchor controller. Specifically, guest WLAN data frames are bridged via LWAPP to the campus Wireless LAN Controller and via EoIP for the campus WLC to a guest VLAN defined at the anchor WLC. In this way, guest user traffic is forwarded to the Internet transparently, with no visibility by, or interaction with, other traffic in the enterprise.

The Guest Access solution is self-contained and does not require any external platforms to perform access control, web portal, or AAA services. All these functions are configured and run within the anchor controller. However, the option exists to implement one or all of these functions externally.

The anchor function, which includes tunnel termination, web authentication, and access control is supported on the following WLC platforms (using version 8.1 or later):

The following WLC platforms cannot be used for anchor functions, but can be used for standard controller deployments and guest mobility tunnel origination (foreign WLC) to a designated anchor controller(s):

Because the anchor controller is responsible for termination of guest WLAN traffic and subsequent access to the Internet, it is typically positioned in the enterprise Internet DMZ.

In doing so, rules can be established within the firewall to precisely manage communications between authorized controllers throughout the enterprise and the anchor controller. Such rules might include filtering on source or destination controller addresses, UDP port 16666 for inter-WLC communication, and IP protocol ID 97 Ethernet in IP for client traffic. Other rules that might be needed include the following:

The firewall can be used to protect the anchor controller from outside threats.

For the best possible performance and because of its suggested positioning in the network, it is strongly recommended that the guest anchor controller be dedicated to supporting guest access functions only.

As previously described, guest traffic is transported at Layer 2 via EoIP. Therefore, the first point at which DHCP services can be implemented is either locally on the anchor controller or the controller can relay client DHCP requests to an external server.

Guest traffic egress occurs at the anchor controller. Guest WLANs are mapped to a dynamic interface/VLAN on the anchor. This interface might connect to an interface on a firewall, therefore, a client’s default gateway IP is that of the firewall. For ingress routing, it is assumed the guest VLAN is directly connected to a DMZ interface on a firewall. The guest (VLAN) subnet is known as a directly connected network and advertised accordingly.

The deployment of a Proxy in Transparent mode in the DMZ can help to enforce enterprise security policies. A proxy is able to monitor, log or even filter guest web traffic that falls into unauthorised categories. Traffic reports might be useful for troubleshooting, tracking or just having more visibility about guest users’ traffic.

Another option would be to enable some URL Blocking features if the firewall supports them for an extra layer of security.

A “guest N+1” was introduced in Release 4.1. This feature supports an automatic ping function that enables a foreign controller to proactively ping anchor controllers to verity control and data path connectivity. In the event of failure or an active anchor becomes unreachable, the foreign controller does the following:

Keep in mind the following in regards to guest N+1 redundancy:

Note Multicast traffic is not supported over guest tunnels.

The Cisco Centralized Guest Access solution offers a built-in web portal that is used to solicit guest credentials for authentication and offers simple branding capabilities, along with the ability to display disclaimer or acceptable use policy information.

As is typical for most web-based authentication systems, in order for guest clients to be redirected to the WLC web authentication page, they must launch a web browser session and attempt to open a destination URL. For redirection to work correctly, the following conditions must be met:

Note: In addition to port 80, there is an option to configure one additional port number that the controller can monitor for redirection.

These are the alternatives for Guest authentication:

The following are some benefits for Wireless Guest Access using a Centralized Controller Architecture: